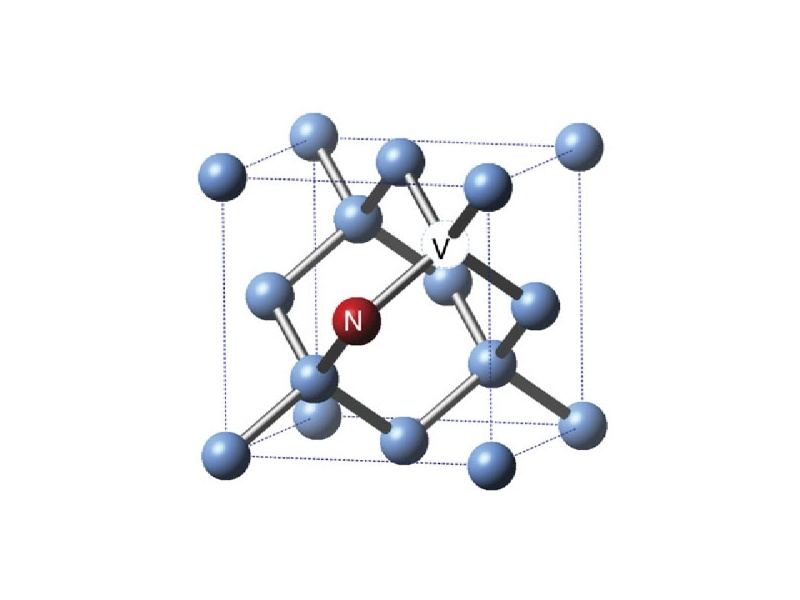 The Nitrogen-Vacancy (NV) defect in diamond is nowadays widely used for applications as magnetic sensor and single-photon source. It is also a promising solid-state quantum bit (qubit) for quantum information processing, due to its unique optical and spin properties at room temperature.

The nitrogen-FIB (i-FIB) opens new perspectives for the targeted creation of NV centers into nano- and micro-structures made in diamond for a wide range of applications.

What is NV center?

The NV defect consists of a substitutional nitrogen atom and an adjacent carbon vacancy in the diamond lattice (figure 1). It behaves as an artificial atom trapped in the diamond matrix, exhibits an efficient and perfectly photostable red photoluminescence, allowing the detection of individual NV defects using optical confocal microscopy at room temperature. Another important feature is that its electron spin can be initialized, coherently manipulated using microwave pulses, and finally read-out.

Such properties have led to a wide range of applications such as marker in life science, high-resolution magnetic sensing or quantum processing. However to improve the efficiency of such devices the key challenge for further developments consists in a controlled engineering of NV defects in high purity single-crystals diamonds.

Generally abundant in natural diamonds, the NV centers can be artificially produced in synthetic material by different means. Diamonds containing substitutional nitrogen can be irradiated (with electrons, protons…) to create vacancies and then annealed, typically above 800°C, to form the NV defects. NV centers can also be produced during the diamond growth by direct nitrogen gas insertion into CVD (Chemical Vapor Deposition) reactor. Nevertheless, none of these two methods allows a three-dimensional engineering of single NV centers. However the implantation of nitrogen ions enables such an engineering especially with focused ion beam technology as it allows maskless and targeted creation of NV centers into some pre-defined structures in diamond.

Combined with a scanning electron microscope, the focused nitrogen beam provided by i-FIB offers new possibilities for targeted nitrogen implantation in predefined structures and ion milling as well as easiness and rapidity. Indeed, SEM enables precise positioning of the sample respectively to the ion beam in the nanometer scale. Many of the devices based on diamond and requiring single or a few NV centers to be placed within a small size region (micro and nanometer scale) may take benefit of this new technique (figure 2).

With this purpose, Prof. J-F. Roch’s academic team realized test arrays of focused nitrogen spots to engineer NV centers and also marking crosses (10 µm long and high fluence implantation) which are visible both in electron microscopy and optical fluorescence microscopy. The tests are made on TESCAN FERA3 FIB-SEM with plasma i-FIB column developed by Orsay Physics (figure 3). In these experiments, the plasma FIB is not equipped with a mass filter. The main ion species is the molecular 14N2+, however the beam contains a few percent of other kinds, mainly 14N+.

Several arrays of focused nitrogen spots (21 x 21 with 2 µm separation) have been implanted (figure 4 left), using a constant implantation time per each spot (from 30 µs to 1 ms). With a constant beam current of 0.3 pA, this corresponds to a number of implanted nitrogen atoms per spot between 110 and 3700. It is expected that 1–5% of the implanted nitrogen will be converted into NV centers after annealing the diamond for two hours at 800°C in vacuum.

The detected photoluminescence of one of the implanted patterns (1 ms of dwell time per each spot) is presented in figure 5. By comparing the mean intensity recorded for a single NV center to the average luminescence intensity emitted from these implanted spots, it is roughly found that they contain 30–40 NV centers. This corresponds to a creation yield of ~1% and mostly present in their negatively charged NV- state (figure 5).

Moreover, optical characterization of implanted structures is realized using Ground-State Depletion (GSD) imaging then proving that the achieved FIB focus was around 100 nm. For a single NV center, an imaging resolution of 35 nm is obtained (figure 7) with the corresponding confocal image in figure 6b. It can be estimated that the spot consists of ~9 NV centers.

These two methods used to estimate the focused nitrogen ion beam resolution are nevertheless in good agreement. They give evidence for a beam resolution in the order of 100 nm. However these results can be improved with the use of a mass filter mounted on the FIB column.

The formation of NV defects might also be caused by induced vacancies trapped by native nitrogen impurities of the sample. However, the implantation is performed in an environment where the content of nitrogen impurities is in the range of 2x1014 cm-3. Considering a nitrogen ion beam diameter of 100 nm and the 20-nm depth of the implanted ions, vacancies are efficiently created within a volume of 2x10-16 cm-3. Consequently, there is less than 10-1 native nitrogen per implantation spot. Thus, NV centers formation are mainly attributed to implanted nitrogen ions by FIB. Figure 2. Examples of applications requiring high precision of
single NV center placement, which can be reliably and reproducibly enabled
using the nitrogen plasma FIB combined with a SEM. Figure 3. (a) Schematic of the TESCAN FERA3 FIB-SEM
used for the implantation experiments (b) Schematics of the nitrogen
plasma i-FIB column developed by Orsay Physics

Figure 5. Luminescence scan of a diamond surface implanted
with a FIB of 14N2+ ions. The inset shows a closer view
of the array of NV centers and the emission spectrum
of one of the implanted spots.

Figure 7. Estimation of the ion beam focus
(a,b) GSD scans of the same single NV and implantation
spot as in figure 6a and 6b respectively.
(c) Deduced positions of the implanted NVs.
(d) GSD image reconstructed by convolving 7c and 7a.