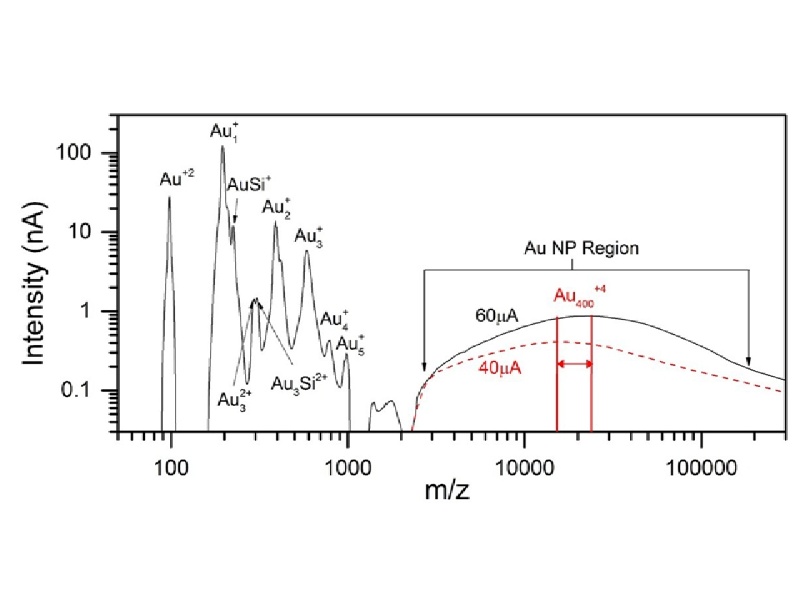 Andromede project (ANR-10-EQPX-23) is a new instrument for surface modification and analysis at the center of a multi-disciplinary team from Orsay University and CNRS led by S. Della Negra (director of research at IPN Orsay University). This equipment uses the impact of gold nanoparticles (Au400+4) in the keV to MeV range delivered by two ion sources in tandem, especially from the LMAIS (Liquid Metal Alloy Ion Source) FIB called NAPIS developed by Orsay Physics. This unique instrument will also study the fundamentals of nano-particle surface interactions.

Why such a project?

When a massive cluster impacts a surface at high velocity, a large volume of material is sputtered from the surface. The ionized portion of these material packs can be analyzed by mass spectrometry. In such conditions, the yield of molecular ions is significant, exceeding one molecular ion

per nano-particle impact and often surpassing a few ten molecular ions detected per impact. By coupling the mass spectrum obtained from a single projectile with the localization obtained from the microscope, imaging mass spectrometry can be performed on the event-by-event level. This has the distinct advantage of using coincidence methodology to study the co-localization of molecules at the nano-scale.

The goal of Andromede is to create a new imaging mass spectrometry instrument for the analysis of nano-fields and objects present on a surface with a spatial resolution of 20 nm. Moreover this instrument will give the opportunity to analyze the surface at atmospheric pressure and therefore the mass spectrometry analysis of native hydrated biological surfaces. This project is a very efficient alternative to the Secondary Ion Mass Spectrometry (SIMS). Molecular information (mass and structure composition) will be obtained from the impact of a nano-particle accelerated in the MeV range by a 1 to 4 MV NEC’s Van de Graaff accelerator.

The two primary ion sources chosen for the project will be placed in tandem in the NEC’s accelerator terminal.

The column is equipped with a LMAIS, two Einzel lenses (first condenser near the source and a focusing/decelerating lens after the mass aperture), two quadrupole deviators (one before the mass selection and one after), a Wien filter (for selecting the ion species according to their mass to charge (m/q) ratio), and a faraday cup.

NAPIS is able to produce gold clusters projectile up to Au400+4, from 20µA source current (high mass resolution mode) until 60µA for the Au nano-particle production. The gold source also produces AunGem+q or AunSim+q clusters due to the incorporation of about 4 wt% of Ge or Si.

The mass spectrum of the ions produced by the gold germanium LMAIS can be found in the figure 6. The resolution achieved with the 20µm aperture is sufficient to resolve the five observable isotopes of germanium. The measured intensities are close to the isotopic ratio reported in the literature.

A key parameter in the production of gold nano-particles is the source current measured on the tip of the LMAIS. This current is directly related to the amount of ions produced from the source. It can be adjusted by varying the potential difference between the extraction electrode and the tip of the reservoir. As can be seen in the figure 7, the increased intensity of delivered nano-particles is accompanied by a shift in the mass distribution of the produced clusters. Thus, raising the extraction potential it is possible to increase the intensity of nano-particles as well as their average mass. Therefore, optimum conditions are achieved for the production of the selected nano-particle, Au400+4, with an extraction current of 50-60 µA.

The Andromede Project is currently under validation tests and will be shortly installed in a new facility of the University Paris Sud Orsay called IGLEX. In this facility two EQUIPEX projects will be set in one place (Andromede and ThomX). This new multi-disciplinary facility will boost collaborations between physicists, chemists, biologists and medical researchers. Figure 2. Andromede project view from above Figure 2. Time of flight mass spectrum of the emitted negative
ions from glycine target under a SINGLE impact of Au100nq+ at 450 qkeV Figure 6. Mass spectrum of ions produced from NAPIS AuGe eutectic
in high mass resolution mode with an extraction current of 20µA
Notice the germanium isotopes are all separated. Figure 7. Mass spectrum of the delivered Aun+q projectiles from
the LMAIS eutectic in nano-particle production mode.
The region of Au400+4 is highlighted in red. 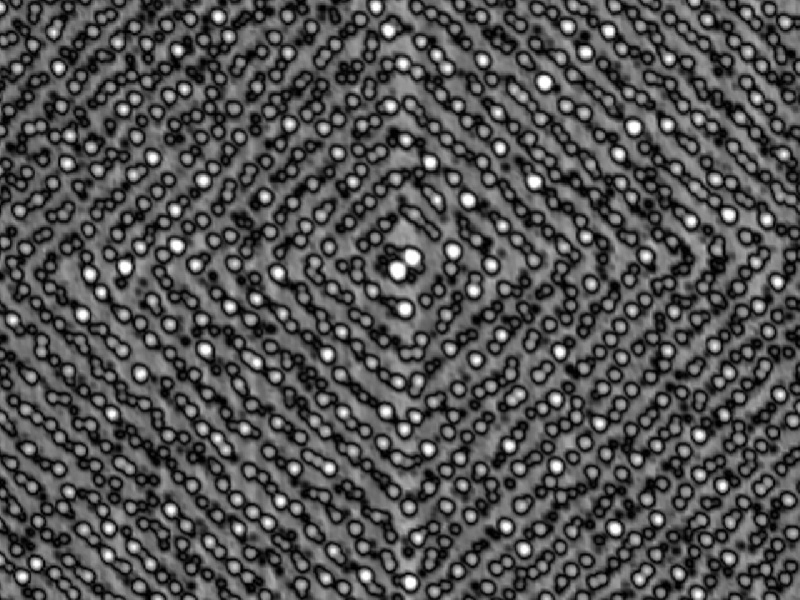 With the increasing demand of high reproducibility, speed and resolution of pattern process fabrication in the nano- and microelectronics, ultimate nanopatterning must be achieved. Cobra ExB FIB technology is a Liquid Metal Alloy Ion source (LMAIS) which offers unique capabilities to create patterns with extreme size and shapes designed on demand due to the maskless process while using non-polluting ion source.

Led by Dr. I. Berbezier, team leader at IM2NP-CNRS Aix-Marseille University in France, the French academic team has studied the influence of the major FIB operating parameters (ion chemical species, beam current, lens voltage and ion dose) on the ultimate nanopatterning resolution. The main advantage of LMAIS FIB is the flexibility of its direct local one step patterning as compared to the costly and complex electron beam lithography (EBL) technique that requires numerous steps. They propose a two-step process based on first FIB milling of a SiO2 sacrificial layer and second SiO2 chemical etching for the fabrication of nanopatterns with the ultimate size/density and whatever shape. Their experiments are made on a TESCAN LYRA1 equipped with Cobra ExB developed by Orsay Physics. In a LMAIS, the ion beam is constituted of the elements of the alloy which can be separated by a Wien filter according to their mass to charge ratio for the selection of one specific specie.

One preliminary level is to determine the minimum FIB dose (= ion current x milling time) to produce milling (= erosion/implantation ratio larger than unity). When increasing the ion current, the morphology of the patterns switched from mounds (implantation see figure 1a) to holes (milling see figure 1b) for doses of 0.05x1014 and 4.06x1015 ions/cm²/s respectively. For the next experiments, LMAIS FIB is in the milling condition.

Dr. I. Berbezier’s team developed a two-step process to produce high resolution patterns with Cobra ExB. The optimized experimental conditions are a very low probe current (1-6 pA) and low dose (milling time 5-30 ms). The Ga+ primary ions are used and the column is perfectly aligned with the focused beam at the sample surface. The patterning process (figure 2) involves first Cobra ExB FIB of an ultra-thin SiO2 layer and second the chemical etching of the SiO2 layer. In such conditions, ultimate size and density of nanopatterns can be achieved.

An example of the AFM images of SiO2/Si (100) nanopatterned in optimized conditions is given in figure 3a. The mean pattern size measured is 35 nm. TEM cross-section observations of LMAIS-FIB pits performed in ultra-thin oxide show a pit diameter of 15 nm regularly spaced every 150 nm (Figure 3b). One can see on this image that the controllable pit depth h = 6 nm reaches the Si substrate and penetrates in the substrate with a reproducible depth penetration of 1 nm.

The flexibility of the Cobra ExB pattern shape is evidenced in figure 4a where Vasarely painting is reproduced by ion milling. Also circles extending over 400 × 400 μm2 are produced (figure 4b).

Then the same nanopatterning is performed but the distance between the patterns to 24 nm is reduced. In a second step the sacrificial ultra-thin SiO2 layer is removed by chemical etching. The nanopatterns obtained (figure 5) exhibit a pitch of 24 nm and a lateral size 15 nm. The shape of the patterns can be tuned and varied ad libitum using a script of the design to be drawn on TESCAN LYRA1 software.

Thus, these results show that both the size and the position of each pattern can be controlled at the nanometer scale by varying different LMAIS FIB milling parameters. Moreover Cobra ExB nanopatterning process can be used for efficient Si wafer nanostructuring. The two-step process described in this note allows the fabrication of patterns with ultimate resolution of 15nm (~4x1011 patterns/cm²) and whatever shape spaced of 24 nm. Figure 3. (a) AFM and (b) TEM images of the ultimate nanopatterning produced by Cobra ExB using 1 pA Ga+

Figure 4. AFM images of the patterns obtained under the optimization process Figure 5. (a) AFM image of the ultimate nanopatterning (b) The mean pitch and pattern diameter measured
on the line profile are 24 nm and 15 nm respectively